As I drove to the post office one Saturday morning, I came upon a sight I have seen so often before that I barely took notice. Roadkill, a bloody mess in the middle of the road. Someone had hit a fat old raccoon which now lay, splayed open for the world to see, straddling the double yellow “Thou Shall Not Pass” lines in the middle of the road.  The ringed tail that fluttered, like a leaf on the breeze, from an oncoming car verifying what lay between the lines ahead.

There was nothing new about this sight for me. I have long since become accustomed to the realities of humankind’s forward-thinking, creation, and engineering, and the ecological repercussions that wildlife face at the intersection of our concrete jungle and God’s natural wilderness.  In all truth, a mangled raccoon lying between the lines on the road is a far cry from what remains of a whitetail deer that has come to terms with the front end of a Peterbilt flying down I-69.

Yet, still, there was something different about this particular mangled ball of fur that caused me to pause. Not merely a moment of silent reflection or a random bewildered, “Oh My God!” But a pause of the heart, a tug on my emotional heartstrings. It was not only my mind that was jarred but my very soul that was shaken in a blink of an eye. In an instant, this image caused me to wrestle with things in my life that lay beyond my control.

In truth, I have thought of that moment for not only days but admittedly weeks. And with the way things are going, it may be months before I find any sense of clarity. Because in that brief moment, a split second, really, from the corner of my eye, my mind captured an image I have yet to cease being able to recall.

Weeks have passed. Life has moved on. Yet, the vision remains constant, and I seem to daily recall. An image as vivid today as it was on that morning. And still, to this very moment, I cannot fully expound. For this image, it gnaws on a deeply rooted heartache. And unfortunately, it seems, I lack the ability, will, and clarity to even articulate.

This is why I have taken my proverbial pen in hand and typed for the world the meandering thoughts of this conflicted man. Perhaps the reason this event consumes my heart so – is that maybe I am not the only one who feels trapped in the middle of the road.

“Perhaps the reason this event consumes my heart so – is that maybe I am not the only one who feels trapped in the middle of the road. ”

For as I drove past that mashed bundle of blood, fur, and bones, that meant nothing more to others than another community nuisance disposed of. Now a forgotten history of a long lost quarry it seems. Tales held now only in memories: of Big Dan, Little Ann, and the bawling coon-hound echoing by the stream.

For here lies the sight… in the fraction of the second that it took to drive by, I glanced out the window and, in horror, did find.   As though in slow motion, it seemed that I passed the corpse of the coon lying between the lines, “Do Not Pass.” But it wasn’t the roadkill that caught my attention. It was the tiny beady eyes that locked into mine. For in the instant that it took for my car to rush past, I saw a baby raccoon suckling on its mother, discarded now as trash. It was not only nursing but kneading its paws like a kitten though feeding on the belly of its milk filled mother. And what impressed upon my heart most was the fear its eyes imparted.

If it were not for the eyes, I might have continued to the post office as though nothing had happened, like every other person who looked, but not saw it. But the eyes of that little creature opened the chasm to my soul, to places I never expected that roadkill could ever go.  For fate, divine Providence, luck, or chance caused that little raccoon to cut through years of built-up emotional baggage in my relational dance. Walls, barriers, barricades, all sorts. All built to protect a fearful, hurt, and burdened heart. For what has been, can never be once more. And to see something you love fall to pieces makes a heart sore. 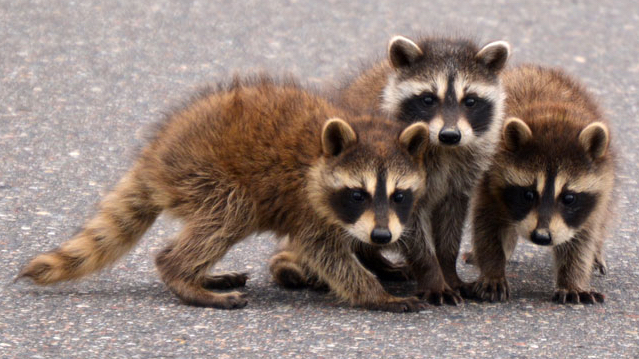 And what will it take for the baby to let go? Will it stay there latched on in the middle of the road? What will inevitably be its end? Will it get hit by a car? “Ten points!” yells the kid. Or maybe a mercy shot from the DNR? I wonder how its end will come after it has come so far.

At what point will the infant choose for its future, unknown? Will it accept its new reality, leave its dead protector, and step into the harsh world ahead?

Ah… hence the dilemma, the reality, what is its choice. Now we break upon the unspoken struggle that vexes this author’s weary voice. The decision to make indecision quickly becomes a non-option. With a pit in the stomach feeling stuck between two doomed options.

For this infant raccoon straddles the middle of the road, trapped between two lines, and must make a choice on which way to go. One option is to return to the woods from whence it came. To the dangers, pitfalls, and snares, its mother tried to escape. Some say, “Better the devil that you know, after all.” But experience has taught that a devil is still a devil, you know.

Still, there are two yellow lines drawn down the middle of the road, and over the other is a field, a new future exposed. To go forward, as mother had tried, a dream for which she inevitably  died.  The potential for new life starting out on your own. But are those hawks, or eagles, in the tree line ahead?  And is that yelping of coyotes in the distance you hear? Are they beckoning you to come to the field to make your new home with them there?

Time is ticking by. It seems faster than ever before. Yet, at the moment, the split second, the baby raccoon chooses to stay the course. Slowly it drinks the last dregs from its mom. It appears neither rushed nor worried at all. In fact, I suspect that if it thought anything at all, it would see no point in making any decision at all.

To go back from whence it came, or to press on to a new future, is not one decision, but two, in the decision, after all. To chose one direction means to leave the other behind. “No Re-Entry,” “No U-Turn” once you step over the line. Your choice is final. Once you make it, there’s no going back. Once you start on your way, you have chosen your path. To the woods, to the field, the choices are cut and dry. Which will it be? Does it even matter? The likelihood is, either way, the little guy will probably die. 

So you see, the decision made so rashly by some, is not so simple, as it were. It is not as easy as “a step toward the future” or as simple as “holding to the past.” It is like trying to balance the weight of the world on a scale with broken chains and no pans. Good intentions abound in the cause, but the practical application seems insane.

No, for this baby raccoon, there is much more peace found in the middle of the road.  For as dangerous as it seems, there is a sense of comfort with its mother’s remains. The consequences of humankind’s forward-thinking, creation, and engineering, and the ecological repercussions that wildlife face at the intersection of our concrete jungle and God’s natural wilderness.

Just like the baby raccoon, I find myself stuck between two lines. Beyond both lines lie countless dangers and uncertainty beyond the road. And as cars rush by at 45mph, my heart races with every whoosh. I, too, realize that it genuinely doesn’t matter which way that I go. By choosing either line… the fact remains... merely by choosing… I will have decided to leave my mother… dead… in the middle of the road.

My child, never forget the things I have taught you. Store my commands in your heart. If you do this, you will live many years, and your life will be satisfying. Never let loyalty and kindness leave you! Tie them around your neck as a reminder. Write them deep within your heart. Then you will find favor with both God and people, and you will earn a good reputation. Trust in the Lord with all your heart; do not depend on your own understanding. Seek his will in all you do, and he will show you which path to take. (Proverbs 3:1-6 NLT)

2 thoughts on “Stuck Between the Lines”